The role of an Observables block is to collect the synchronization data coming from all the processing Channels, and to compute from them the GNSS basic measurements: pseudorange, carrier phase (or its phase-range version) and Doppler shift (or its pseudorange rate version).

It follows the description of mathematical models for the obtained measurements, with a physical interpretation. Those models will be used in the computation of the Position-Velocity-Time solution.

The equation can be written by using the geometric range between satellite and receiver antennas, the receiver and satellite clock biases and , the ionospheric and tropospheric delays and and the measurement error as:

GNSS-SDR performs pseudorange generation based on setting a common reception time across all channels2. The result of this approach is not an absolute pseudorange, but a relative pseudorange with respect to the value (of pseudorange) allocated for a reference satellite. This is possible thanks to the time of week (TOW) information, that is the epoch conveyed by the navigation message, and the associated reception time , that is the epoch measured by the receiver’s time counter, both available for each satellite.

The first step performed by the common reception time algorithm is the selection of a reference satellite: it is the satellite with the most recent TOW (which is the nearest satellite), denoted as , whose associated is taken as the common reception time for all channels. An initial travel time ( ms is assigned to this satellite, but in general it is a value between and milliseconds according to the user altitude) that can be easily converted in meters considering the speed of light. Then, the pseudoranges for all other satellites are derived by adding the relative-arrival times. Each travel time can be computed as:

where is the difference between the reference and the current TOW of the -th satellite; is the time elapsed between the reference and the actual receiver time, when the pseudorange must be computed for the specific satellite. This method is equivalent to taking a snapshot of all the channels’ counters at a given time, and thus it can produce pseudoranges at any time, without waiting for a particular bit front on each channel.

The block diagram of such approach is shown below: 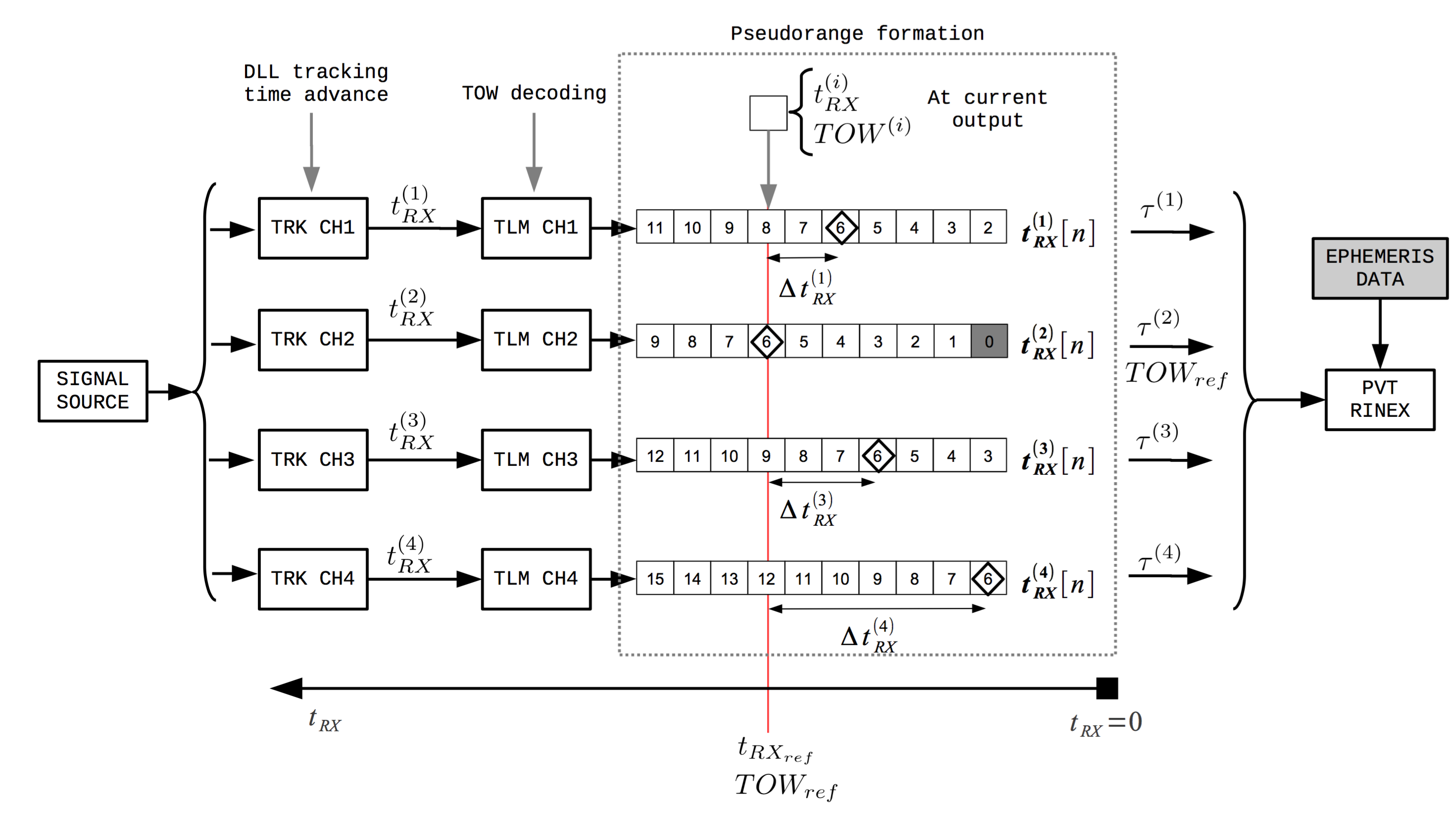 Note that, in the case of a multi-system receiver, all pseudorange observations must be referred to one receiver clock only.

The carrier phase measurement is actually a measurement on the beat frequency between the received carrier of the satellite signal and a receiver-generated reference frequency. It can be modeled as:

As shown in a paper by Petovello and O’Driscoll4, the carrier‐phase integer ambiguity term can be written as:

In order to generate usable phase measurements, the receiver phase observations must maintain a constant integer number of cycles offset from the true carrier phase. That is, if the range increases by one cycle (i.e., one wavelength), the integer component of the NCO, denoted as , also increments by one cycle.

Phase measurements are sometimes given in meters. This is referred to as phase-range measurement, and it is defined as the carrier phase multiplied by the carrier wavelength . It can be expressed as:

The term admits a more detailed model (including antenna phase center offsets and variations, station displacement by earth tides, phase windup effect and relativity correction on the satellite clock) that will be useful for precise point positioning algorithms. The phase-range measurement can then be modeled as:

Since the speeds of the receiver and the satellite are small compared to the speed of the wave, the difference between the observed frequency and emitted frequency can be approximated by:

Then, the Doppler shift measurement can be written as:

Doppler shift measurements are sometimes given in m/s. This is referred to as pseudorange rate measurement, and it is defined as the Doppler shift multiplied by the negative of carrier wavelength . Its model can be written as:

The noisy (but unambiguous) code pseudorange measurements can be smoothed with the precise (but ambiguous) carrier phase measurements. A simple algorithm, known as the Hatch filter, is given as follows6:

Let and be the code and carrier measurements of a given satellite , in the band , at the time . Thence, the smoothed code can be computed as:

where when and when .

The algorithm is initialised with:

This algorithm is initialised every time that a carrier phase cycle-slip occurs.

It accepts the following parameters:

If dump=true, the logging of data is also delivered in MATLAB Level 5 MAT-file v7.3 format, in a file with same name than dump_filename but terminated in .mat instead of .dat. This is a compressed binary file format which can be easily read with Matlab or Octave, by doing load observables.mat, or in Python via the h5py library. The stored variables are matrices with a number of rows equal to the total number of channels set up in the configuration file, and a number of columns equal to the number of epochs (that is, tracking integration times). This block stores the following variables:

THIS FEATURE IS AVAILABLE STARTING FROM GNSS-SDR v0.0.10.