The Input Filter is the second processing block inside a Signal Conditioner when the later is using a Signal_Conditioner implementation.

The role on an Input Filter block is to filter noise and possible interferences from the incoming signal.

There are three kinds of filter implementations available:

In the presence of noise and interferences, the signal y(t) received at the antenna of a GNSS receiver can be modeled as1

The sequence is obtained by amplifying, down-converting and digitizing the analog signal with a sampling frequency .

This implementation, based on the Parks-McClellan algorithm, computes the optimal (in the Chebyshev/minimax sense) FIR filter impulse response given a set of band edges, the desired response on those bands, and the weight given to the error in those bands. The Parks-McClellan algorithm uses the Remez exchange algorithm and Chebyshev approximation theory to design filters with an optimal fit between the desired and actual frequency responses.

This implementation accepts the following parameters: 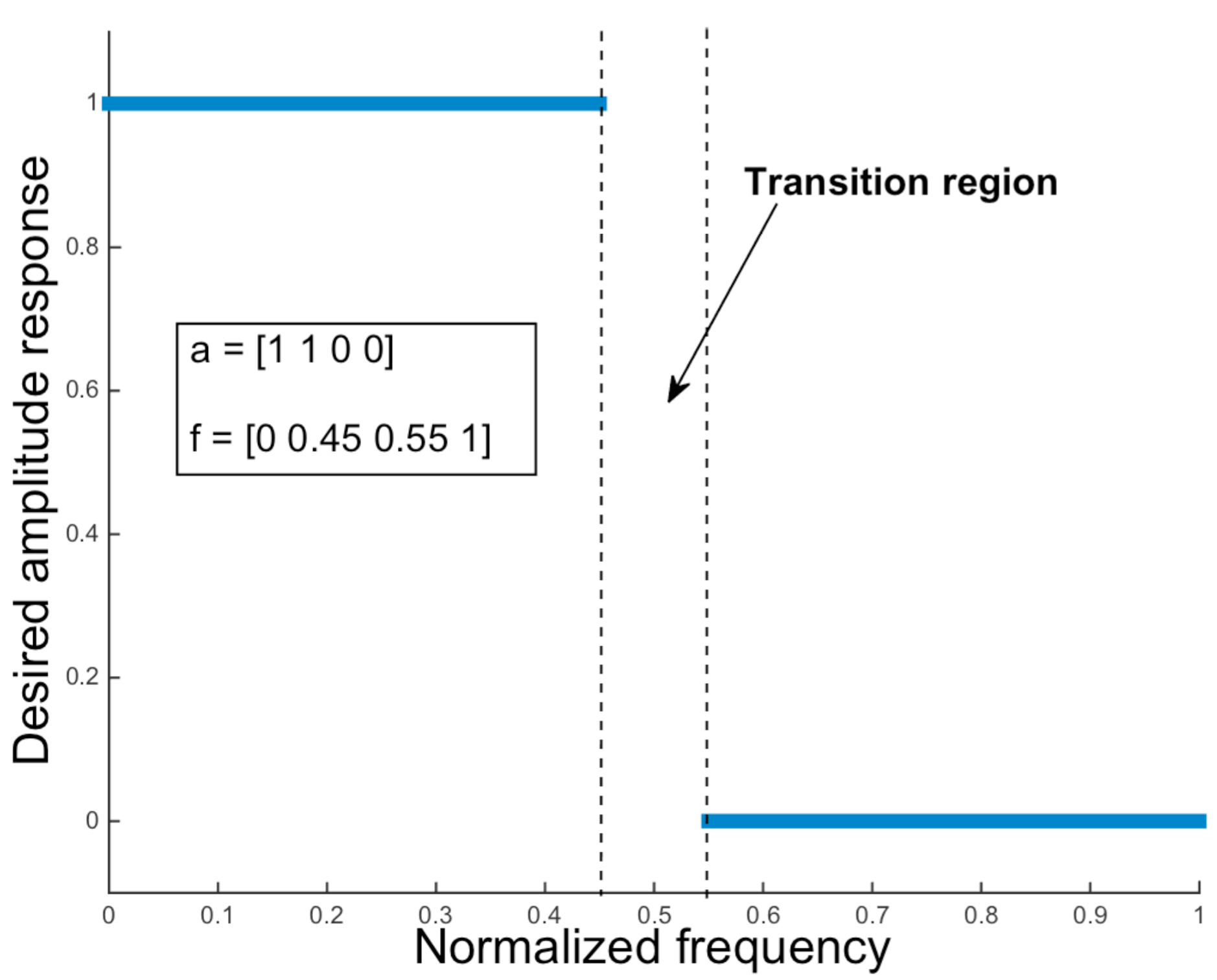 If you have access to MATLAB, you can plot easily the frequency response of the filter. Just copy these lines into the command window:

This implementation features a frequency-translating FIR filter. This is often used when input data is at an intermediate frequency, as it performs filtering, decimation and frequency shifting in one single step. The basic principle of this block is to perform:

This block is a wrapper of GNU Radio’s freq_xlating_fir_filter_impl.h block. It applies the baseband filter moved up to the intermediate frequency , then it performs decimation by a factor and a de-rotation with to downshift the signal to baseband. Thus, the filter parameters apply to the signal before decimation.

The block is ideally suited for a “channel selection filter” and can be efficiently used to select and decimate a narrow band signal out of wide bandwidth input.

This implementation accepts the following parameters:

The first step of any interference mitigation algorithm consists in determining whether the interference is present within the receiver’s frequency band. A simple method is to calculate the input signal power and compare it against a certain threshold. This threshold should be set according to the signal level in absence of the interference signal. Since the power of the GNSS useful signal components at the receiver’s antenna is extremely weak (several tens of dB below the background noise), the input signal power when the interference source is switched off is in practice the same as the background noise power. This is

After the ADC step and exploiting the statistical properties of (i.i.d. Gaussian symmetric circular noise), it is possible to guarantee a certain probability of false alarm, i.e. the probability of detecting the interference when the jamming signal is not present. Comparing the signal magnitude against the threshold and taking a decision in all the samples is not feasible in real time applications, so the detection algorithm runs on signal segments of length samples. The energy of a signal segment is

The random variable follows a chi-squared distribution with degrees of freedom. According with the tabulated values of that distribution, it is possible to set the threshold that produces a given probability of false alarm. When the segment’s energy exceeds the detection threshold, then the segment is processed with the interference mitigation algorithm.

Note that should be estimated by a noise floor power estimation method. With the purpose of minimizing the random effects, several noise power estimations are averaged on consecutive signal segments. In addition, as the receiver background noise may change along the time, the estimation of is performed periodically. In this sense, the minimum signal length to be processed (filtered by a mitigation input filter) is one signal segment because the detection of an interference affects to the entire segment. The figure below summarizes the underlying idea.

The basic principle of a Pulse Blanking filter is illustrated in the figure below. If the input signal has a squared magnitude within an observation window that is greater than the blanking threshold, , then the output signal is set to zero. Otherwise, the output is equal to the input. Replacing the corrupted samples by zero ensures that correlation values are minimally distorted.

Diagram of the Pulse Blanking filter.

The aim of the Notch filter is to eliminate jamming signals who are instantaneously narrowband and, also, their instantaneous frequency changes along time.

Diagram of the notch filter.

When Interference Cancellation is adopted, the interfering signal is at first removed from , and subsequent signal processing is applied to . Since is usually not known, an estimation technique is required to reconstruct it and to obtain . This interference is usually estimated by considering a specific signal model which depends only on a reduced number of parameters. Let us consider a single component signal1

where and are two real signals with and . Although this model is quite general, the hypothesis assumed by the single component model is that is instantaneously narrow band, i.e., it has a single frequency component at each instant in time. Continuous Wave and chirp signals are examples of waveforms that can be described by this model. The instantaneous frequency of a single component signal is defined as the discrete derivative of its phase:

This block implements a simple, single-sample Prony’s frequency estimator3. The interference frequency is estimated as

Single component signals can be generated by a first order recurrence equation,

where is a time-varying coefficient that can be expressed as:

This principle is exploited in a single pole notch filter which is characterized by the following transfer function:

This is an implementation of a notch filter in which the user can choose the updating rate of the filter central frequency estimation. This requires lower computational resources since the Prony estimation is no longer performed sample by sample.

That update rate must be set according to the variation rate of the jammer frequency. Slow variations in the jammer frequency are well tracked by a slow updating rate, but this is not true for fast variations. In this implementation, the maximum updating rate available is one update per signal segment, this is to say, , where is the sampling frequency and is the number of samples per signal segment.

This implementation copies samples from its input to its output, without performing any filtering or data type conversion.

It accepts the following parameters: