Testing is a concept intimately related to inquiry, creativity, design, methodology, tools, best practices, and, ultimately, quality. People from Design Thinking1\(^,\)2 understand testing in the sense of prototyping, of trying out something that could be useful for someone else whose needs we have empathized with, and as a source of innovation. People from Quality Assurance3\(^,\)4 understand testing as the detailed procedure that leads to a pass/fail decision based upon some pre-defined requirements. A humble distinguished developer just wants to know if his or her code works as expected. Hence, it is important to recognize that the code developed to test the functionality of a given piece of source code is as valuable as the implementation itself, constituting an inalienable part of the project’s source code tree. This page provides an overview of the philosophy behind the approach undertaken by the GNSS-SDR project, it documents the currently available testing procedures and describes how to add new ones.

The Science of Improvement

Improvement has meaning only in terms of observation based on given criteria. That is, improvement is useful and has meaning when it is defined by characteristics such as more efficient, more accurate, more reliable, and so on. Thus, we need to identify the dimensions (or design forces) in which a software-defined GNSS receiver can be improved, and to define adequate metrics, measurement procedures, and feedback mechanisms for each of those dimensions, in order to objectively assess improvement.

The concepts of improvement and change are strongly connected. Although change will not always result in improvement, all improvement requires change.

Langley et al.5 described the principles to maximize the results of improvement efforts as:

It is then of the utmost importance to define a development methodology and adequate tools to measure improvement and to integrate changes into the system in a transparent, controlled, and distributed fashion.

Authors in Langley et al.5 claim that the Plan-Do-Study-Act (PDSA) cycles constitute an approach that is aligned with the scientific method. Those cycles were made popular by W. E. Deming in the early 1950s as PDCA (Plan-Do-Check-Act), and at a later stage the same author replaced “Check” with “Study” to emphasize the importance of observing and learning from the “Do” step results6. Those four steps are described as: 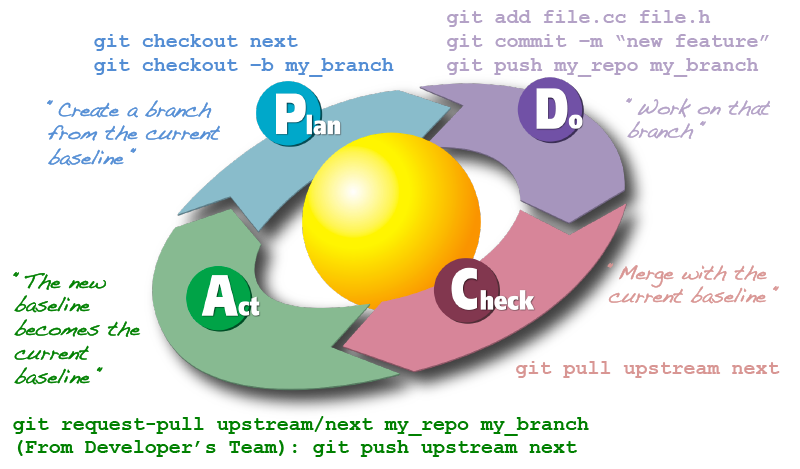 A graphical representation of Git and PDCA cycles integration.

As shown in the figure above, Git integrates PDCA cycles in the development process in a seamless and natural way. The PLAN step begins by creating a new branch of development from the current baseline (that is, the next branch). This new branch accommodates testing code for the new improvement, the actual new development work, and eventual test passing and code refactoring in the DO step. Then, CHECK/STUDY step is related to merging the new code with the existing baseline and run all the existing tests, in order to ensure that no integration issues arise. In the case they exist, there is a step back to the DO step and fix the integration issues. In the case that the taken approach in the particular PDCA cycle results in not contributing to an actual improvement, the development branch can be kept for documentation purposes without affecting the baseline. Once the developer has absolute confidence that the change is an objective improvement, he or she ACTs and pushes the change to the reference repository, and the new version incorporating the improvement becomes the new current baseline.

By engaging rapid cycles of the PDCA workflow, the GNSS-SDR project aims to learn fast, fail fast, and improve quickly. That failures may occur is not the problem; that we fail to learn from them is. Rate of change, that is, rate of improvement, is a key competitive factor in today’s world. PDCA cycles allow for:

This means that all kinds of contributions, from fixing a typo in a source code’s comment to the addition of a whole new GNSS signal processing chain, are very welcome and greatly appreciated since all of them point towards improved quality, no matter the step size. More details on the howtos in the context of GNSS-SDR are available in our Git tutorial and in the CONTRIBUTING.md file.

Test-driven development (TDD) is a software development process that relies on the repetition of a very short development cycle: first, the developer writes an (initially failing) automated test suite that defines a desired improvement or new function, then produces the minimum amount of code to pass that test, and finally refactors the new code to acceptable standards. It is an Agile-based approach to building complex systems where unit tests (and in some cases inter-component integration tests) are built in advance of the product software and are used exercised upon component implementation. This methodology is claimed to offer valuable benefits to software development: it facilitates change, simplifies integration, automates documentation, helps separate the interface from the implementation, increases developers’ productivity, and plays a central role in the software quality assurance process7. 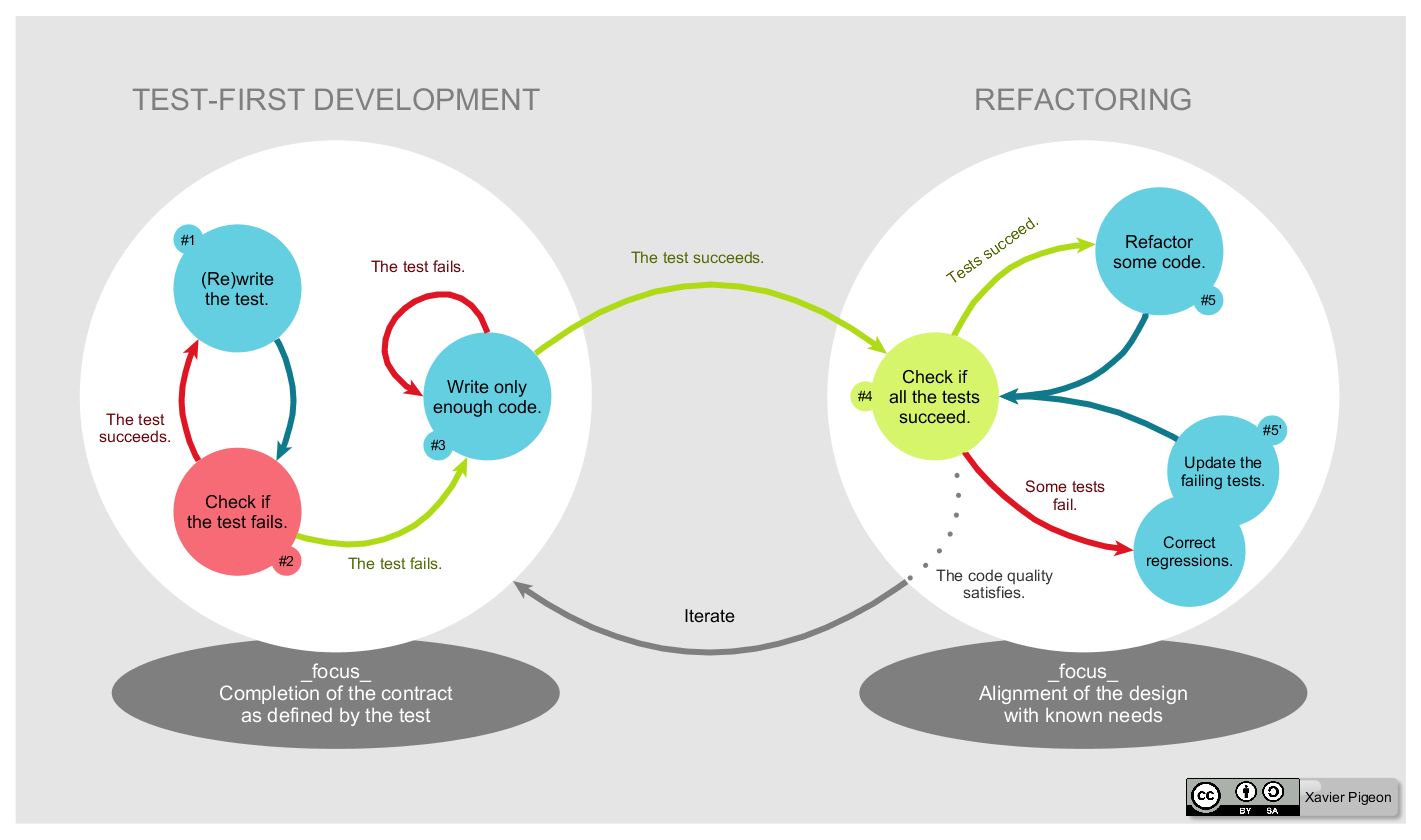 A graphical representation of the Test-Driven Development lifecycle. Source: Wikipedia.

A typical test-driven development cycle, as described by Beck3, can be summarized as:

According to Beck3, software tests must be:

Software tests have some additional constraints and recommended patterns:

The key areas in which this approach can contribute are:

GNSS-SDR uses the Google C++ Testing Framework (usually referred to as Google Test) for its testing code. This framework is based on the following premises:

When using Google Test, developers write assertions, which are statements that check whether a condition is true. An assertion’s result can be success, nonfatal failure, or fatal failure. If a fatal failure occurs, it aborts the current function; otherwise, the program continues normally.

Test Cases use assertions to verify the tested code’s behavior. If a test case crashes or has a failed assertion, then it fails; otherwise, it succeeds.

A Test Suite contains one or many test cases. You should group your test cases into test suites that reflect the structure of the tested code. When multiple test cases in a test suite need to share common objects and subroutines, you can put them into a Test Fixture class.

For details about the available Test Suites and how to build and run them, please check Testing the software receiver, Part II: Test Execution.